Flying: A Review of Wesley the Owl by Stacey O’Brien

“When I would look into his relaxed, at-peace-with-himself eyes, I felt like I was looking into something inscrutable, unobtainable, deeper than we can possibly imagine, an old soul that reflected someone bigger, ineffable, eternal.”

So writes Ms. O’Brien about Wesley, a baby barn owl with an injured wing that she adopted while living in southern California.   Wesley, an intelligent and wise “old soul” wound up living for all of 19 years, the equivalent of 120 human years.   Trained as a biologist specializing in wild animal behavior, the author thought she know a lot about wild animals but Wesley showed her she still had much to learn.

The reader learns that Wesley played like a kitten, had an impressive vocabulary, played in bath water (supposedly something that would never occur with a barn owl), attracted wild female barn owl admirers, and could tell time.   We further learn that Wesley, like a house cat or dog, could get mad at his owner and either bawl her out or literally turn his back on her.

The best parts of this true story are the happy beginning and the sad ending.   As O’Brien rightly notes:  “The… thing I hate about animal stories is that after you’ve read the entire book and you really care about the animal, they go and tell you all about how the animal died.”   This is so true here as the first 215 pages are easy to read, but the remainder is quite difficult for animal owners and lovers to get through.   O’Brien goes so far as to explain to us how, while she was suffering from a potentially fatal illness, her love for Wesley led her to repel her thoughts of suicide.

Yes this is, as advertised, “the remarkable love story of an owl and his girl.”   While it is not quite as strong as the greatly moving books A Cat Named Darwin by William Jordon or The Best Cat Ever by the late Cleveland Amory, it is top-rate.

The author has never fully stopped missing the charming barn owl known as Wesley.   When you finish this book you, the reader, will also greatly miss him…   But you will be quite glad to have shared in his amazing life, at least for a short while. 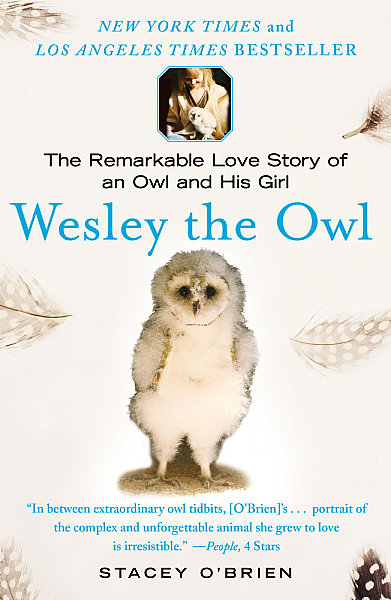 The book was purchased by the reviewer.