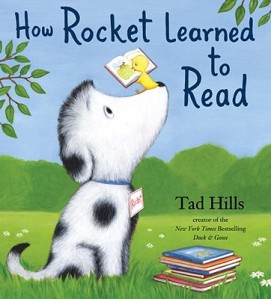 Rocket is the doggie version of a busy child.   He’s eager and energetic with a good amount of curiosity when it comes to a story about Buster the dog and the mystery of where a tasty bone was buried.   Rocket is gently enticed into learning how to read by a very chipper little yellow bird, whose attitude is very much like this reviewer’s first grade teacher, Miss Thom.   The little bird sets up an outdoor classroom for Rocket and he begins with learning the alphabet.

This delightful children’s book demonstrates the value of building knowledge and practicing spelling.   Rocket endures a cold, snowy winter by practicing his letters in the snow when the little bird instructor migrates south.   Come spring they are back together in the outdoor classroom.   Rocket proves himself to be an excellent student and he’ s rewarded with the great joy of reading book after book.   His favorite about Buster is read again and again and again.   (Joy, joy.)

This review was written by Ruta Arellano.   A copy of the book was purchased for her grandchild.   How Rocket Learned to Read is primarily targeted for children between the ages of 3 and 8.   (Consider it as a special Christmas present for a little one!) 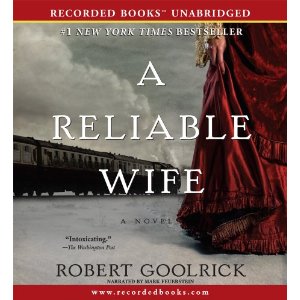 A Reliable Wife: A Novel by Robert Goolrick (Algonquin Books)

I just finished a marathon reading of A Reliable Wife.   It was one of those books that I literally couldn’t put down.

A Reliable Wife is a beautifully written novel set in the harsh winter of Northern Wisconsin in 1907 (location: Fictional town of Truitt somewhere on the shores of Lake Superior).   Ralph Tuitt has lived a lonely past twenty years after a very tragic and mysterious married life.   He advertises for a mail-ordered “reliable wife.”   Catherine Land answers his advertisement and upon arrival is not the Plain Jane in the picture that she sent to Ralph.   She is beautiful, and has many secrets of her own to hide.   There is a roller coaster of events that I will leave off so as to not spoil the book.

The lyrical prose of this book was wonderful, starting with the first line, “It was a bitter cold, the air electric with all that had not happened yet.”   The setting of the novel in the cold, bitter winter in a land of depressed people was stark and perfect for the novel.   Ralph and Catherine are both troubled souls seeking redemption.   As the book progresses, it is interesting to see how two people who start off seeming so unalike are actually quite similar.   I enjoyed their characters and learning more about them.

The story was unpredictable and twisted and turned to an ending I certainly did not predict.   It kept me riveted.   I really wanted to read this book after seeing it compared to my favorite authors, Daphne Du Maurier and the Bronte sisters.   While it did have a gothic sinister darkness to the plot that was also driven with despair, it is really its own novel.   I did love it, but I wouldn’t rank it above Jane Eyre or Rebecca.

With the setting of the novel in 1907, one would expect it to be staid and sexless, it is anything but.   At first I was put off by Ralph’s constant thoughts about sex as it just wasn’t something I was interested in reading.   But sex and the way different characters handle it or have issues with it is definitely a main part of this book and I grew accepting of that.

One small complaint I had is that sometimes the setting did not seem accurate.   I lived for six years in Houghton, Michigan in the Upper Peninsula, which is isolated and routinely receives 300 plus inches of snow in a year.   I now currently live in Northeast Wisconsin.   It seemed strange to me that the world would be so winter locked in the fall.   I could see that happening around Thanksgiving and especially in January or February, but not before.   I also wondered about the trips to Chicago without mention of Milwaukee or Minneapolis, both of which would be closer to Wisconsin or the Lake Superior shore.   Like I said, though, these were small items that seemed only out-of-place to me as I’ve lived in the area.   It just showed to me that the author had not, but he still wove a fantastic story.

Overall, it was a great riveting tale that will keep you guessing until the end.

This review was written by Laura Gerold of Laura’s Reviews.   You can read more of her fine reviews by going to:  http://lauragerold.blogspot.com/ .   A Reliable Wife was checked out of the Kewaunee Public Library.