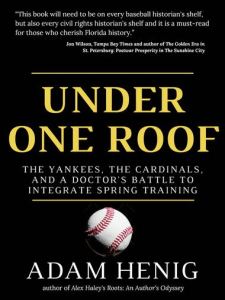 He’s taught in his school/From the start by the rule/That the laws are with him/To protect his white skin… Bob Dylan, “Only a Pawn in Their Game”

Under One Roof: The Yankees, the Cardinals, and a Doctor’s Battle to Integrate Spring Training by Adam Henig (Wise Ink, $9.95, 146 pages)

Much has been written and passed on about Jackie Robinson breaking the color barrier in major league baseball and the history of the Negro Leagues. However, that single act was only the beginning of a long struggle for equality in major league baseball and society. Those that followed suffered significant abuse and hardship all to often. Hank Aaron was the target of vile, despicable hatred when he broke Babe Ruth’s home run record. That, too, has been chronicled in great detail. The travails of African American baseball players during spring training received far less scrutiny, as has their journey through minor league cities in the south during the 50s, 60s, and beyond.

Adam Henig shines a light on the subject in Under One Roof. It is more of a flashlight than a spotlight, as had he chosen he could have expanded his tale to include a more substantial account of the travails of these athletes and the social mores of the time. As it stands, he confined his story to the efforts of civil rights activist, Dr. Ralph Wimbish and his work to integrate the community of St. Petersburg, Florida.

In the early 60s, St. Petersburg was the spring training home of both the Cardinals and the Yankees. Pitcher Bob Gibson of the Cardinals and catcher Elston Howard of the Yankees were among the prominent black players on those teams. At that time they and their other black teammates were not allowed to stay at the same hotel as their white counterparts. Instead, separate housing arrangements were made in segregated parts of town. Special transportation and other provisions were secured to accommodate these players.

Henig seems to be interested in telling a story more than creating an historical record which, in the end, likely serves the same purpose. Although it is a good read, and while there is research, interviews, and other supporting documentation, this is a very important topic and – had he chosen to do so, he could have gone into greater depth. The actual text runs 100 pages and the book is accessible to younger readers, which is a good thing, and would make excellent reading for middle school students and/or other classes.

My former high school coach, Ron Herr, was a phenomenal pitcher who came within a sliver of making the big leagues. He later briefly served as a coach with the Atlanta Braves. He often told us stories of the inhuman treatment that Rico Carty, Aaron, and other were subject to – buses pulling over when players needed to use a restroom and the inevitable conflict to follow, as well as predictable stories involving restaurants, housing, and fan behavior.

Gladly, my children live in (and to their credit espouse) a more tolerant and accepting society than previous generations. We are certainly not there yet, as is evidenced by recent tragedies in Ferguson, MO, Charleston, SC, and daily chaos in the south and west sides of Chicago that will likely break records for shootings and fatalities. I applaud Henig for keeping these stories alive for younger generations, who were not around to know just how tumultuous a time this was in our country’s history. If there is any criticism of the book, it would be that he only scratched the surface. 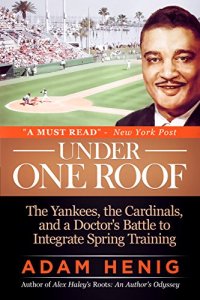 Here’s hoping for a better tomorrow.

A review copy was received from the author. Adam Henig is also the author of Alex Haley’s Roots: An Author’s Odyssey.

Dave Moyer is an educator, former baseball player and coach, and the author of Life and Life Only: A Novel.