You can observe a lot by just watching.   – Yogi Berra

Parents Behaving Badly is a solid, if not spectacular, offering by Scott Gummer.   Gummer has likely drawn from some of his experiences as a participant, parent, and youth sports coach to craft a story familiar to most people with sons – the saga of a summer spent on the diamonds of Little League baseball.

The main character, Ben Holden, is the son of a local coaching legend known to everyone simply as, you guessed it, Coach.   Though the entire town reveres the man, as is often the case, the emotions of his own children are a bit more complicated.   Ben’s older brother, Fred, is the talented screw up, while Ben – the moderately talented overachiever – quits baseball to run track.   Sister Nancy spends  most of  her life moving from man to man with speculation that her hang-ups somehow trace back to her relationship with her father.   Ben is clearly the most centered and focused of the three children.

When Ben and his wife Jili return to their hometown in California from a stint out East, their two boys express an interest in playing Little League ball.   About two-thirds of the way into the season, their oldest son Andrew’s coach gets suspended by the league for inappropriate behavior, and Ben is thrust into the role of being the team’s coach.   His players and parents are forced to adjust to a new philosophy – going from “win at all costs” to “have fun playing the game.”   The shift is far from an easy one, and you can guess for yourself whether the “good guys” win at the end.

Along the way, past relationships and high school memories are revisited (Ben and Jili went to the same high school and started dating in college), and many local characters resurface throughout the story.   Middle age adult behaviors, lifestyle adjustments, and sexual obsessions are as much or more of the story as is our country’s troubled evolution of youth participation in sports (and the often  misguided parental attitudes associated with it).

The author appears to rush through the plot’s action in order to get at the complicated themes that line the story.   The reader nevertheless is interested in turning the page to find out what happens next.   Characters are introduced in rapid succession in the initial two chapters, making it a bit difficult to truly get to know them.   They’re a bit stereotypical but, in fairness, easy to relate to.

Anyone who has spent as little as five minutes at a Little League game has seen these people:  the coach who has to prove his self-worth by winning baseball games featuring 12-year-olds; the parents who drive their children to the point of quitting; the mom-slut who thinks that everywhere she goes, someone is dying to look at her scantily clad body; the daughter who spends every waking moment texting and Twittering; the middle-aged male who spends much of the day daydreaming about having a sex life, etc., etc., etc.

When Ben first takes over as the team’s coach, he comes across as completely clueless, which is hard to believe considering his father’s history.   The fact that he quickly develops a reasonable degree of competence is not the most believable portion of the tale, although it may be a logical outcome.   As one who has experienced the shenanigans of Little League draft rooms and the frequently politically motivated – and arguably unethical selection – selection of post-season All-Star teams, these sections are quite strong.   Also, they are either hilarious or sadly pathetic depending on your perspective.

A review copy was provided by the publisher.   Mr. Moyer is the author of Life and Life Only, a novel of baseball and Bob Dylan.   A recommended memoir that covers much of the same territory is The Opposite Field by Jesse Katz (Three Rivers Press, $15.00, 352 pages). 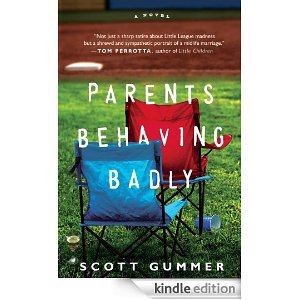