Tag Archives: Zoot Your Own Horn

Zoot Your Own Horn 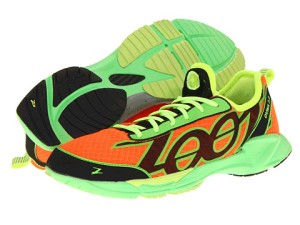 Back in the 2000s (2001-2003), Nike produced two excellent racing flats/lightweight trainers: the Air Myriad and the Air Ghost Racer (shown below). These were shoes built for runners who needed the smallest modicum of pronation control; technically, they were stability racers, but just barely. The best feature of these models was that the sole cushioning pads seemed to have been located in just the right place to support the runner moving at a steady pace. (I spent years searching for every pair of the Air Myriad and Air Ghost Racer that I could find in my size, or close to it.)

I had given up hope of seeing a modern version of the Air Myriad or Air Ghost Racer until I opened a box of shoes sent to me by Zoot Sports and saw the Zoot Ovwa 2.0. The Ovwa was originally designed for triathlon athletes and it’s a slip-on model. The Ovwa is so wildly colored — in brighter than bright blaze, safety yellow and green flash — that it makes neon-colored running shoes look conservative! (Those jogging beside you may need to wear sunglasses.)

The Ovwa is a snugly-fitting shoe for those with narrow to medium feet; however, it is not uncomfortable because the foot is surrounded by elastic. If you wear ultra-thin socks, you may feel a bit of irritation on your ankle bone; switching to standard or medium weight socks eliminates that. A half-size up, the fit seems to be just about perfect.

This shoe is a trainer for minimal pronators who want to run quickly. The forefoot’s blown rubber cushioning appears to be just as protective — and likely a bit more so — than that found on the front of the Tempo Trainer from Zoot. The heel cushioning is soft and it’s contained within a flared, squared-off heel. Squared-off heels not only look different, they also feel different in action. I’m a fan.

The Ovwa sits on a semi-curved last, it’s slip-lasted under the mid-weight insole, has a traditional looking grey colored medial post, and weighs 8.8 ounces. The 10mm heel drop means that it’s friendly to heel-strikers, while facilitating mid-foot landings. The rounded toe box is medium-low, not too high or low. Some runners will elect to wear this model without socks, as it has a fully lined interior.

The Ovwa is a very good track shoe. This shoe lets you land and bounce on the balls of the feet with relative impunity. The underfoot pads are placed in a way that makes it easy to maintain a quick and structured tempo on a track or on sidewalks.

The Ovwa provides decent protection for the feet on a crushed gravel trail and a close to heavenly ride on asphalt. The energy return from the shoe’s cushioning system allows you to kick your feet up high. Despite this, there’s a touch of European-style firmness in the mid-sole (something that was true of the Air Myriad and Air Ghost Racer). The shoe is cushioned but not overly soft.

Most will be able to use the Ovwa for competitive runs ranging from a 5K to a half-marathon. It should make a fine marathon shoe for small, lightweight individuals who need a smidgen of support underfoot for the 26.2 miles. The Ovwa is also a pretty good trail runner. It allows for controlled lateral movements on a hard-packed dirt trail, which supports fast-paced running on this type of surface.

The Ovwa makes for a comfortable walking shoe, so much so that I found myself keeping the pair on even for Plebian-style trips to grocery and hardware stores. If I rode a bike, I’d likely keep these on when doing so. (The shoe can, of course, be used if you suddenly decide to compete in a triathlon.)

I felt like these shoes were made for me. Maybe you’ll feel the same way.

Verdict: The Zoot Ovwa 2.0 is a shoe that’s light but very well cushioned for training runs on almost any surface. It’s a great shoe for mid-foot and heel strikers opting for fast-paced training and racing. The Ovwa should serve as a more than competent marathon shoe for mildly pronating, efficient runners.

Note: The Sneaker Report website selected the Nike (Air) Ghost Racer as one of the 100 best running shoes of all time. The “Ghost” came in at number 75.

This article originally appeared on the Blogcritics site: