A Woman of Heart and Mind

Joni Mitchell, a self-described woman of heart and mind, never shows up within the pages of Joni.   There are a couple of reasons for this.   First, Katherine Monk never had the opportunity to interact with Ms. Mitchell, leaving her unable to shed light on the human being.   Second, Monk sought to create a quasi-academic treatise on the subject of Philosophy and Religion and the Music of Joni Mitchell.   Frankly, it’s simply not that interesting even if one was (like this reader) a Philosophy and Religion major in college. 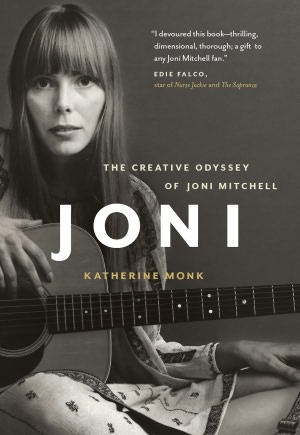 No, this is not another fan’s tribute to Joni; instead, it’s a somewhat overwrought collection of essays that seeks to find the meaning of Mitchell’s music via the words of Nietzsche and other philosophers.   This is painful enough, but just when one hopes that she won’t throw religious figures into the analytical mix, she proceeds to discuss St. Augustine and revisit the biblical Story of Job.   In the end – in the words of Bob Dylan, nothing is revealed.

Mitchell herself once said that writing about music is like trying to dance to architecture.   Picking up a copy of Joni’s Blue or For the Roses album is much preferable to attempting this strange dance.   Very much preferable.