“How terribly strange to be 70… Preserve your memories, they’re all that’s left you.” Paul Simon (“Old Friends”)

Then I paused for a minute. “Harry,” I said finally, “do you remember who you were?” “I was a baseball player?”

That passage right there from page 36 of Ed Prence’s sparse 166-page novel The Last Perfect Summer is the essence of the story.

This book is for anybody who still remembers what the term “ghost runner” means. It for those who remember “fastpitch” against the wall, overhand lob with a chain-link home run fence, and whiffle ball batting your favorite team’s line up from both sides of the plate. It is for those who’ve played it as well as those who love it.

In the story, Ted Tresh visits former Little League teammate Harry Kirkland in a care facility in which Harry is essentially condemned to die. Having lived for over a decade with other patients in similar but varying states of need and/or dementia, he’s had fewer than a handful of visitors. Harry lives in his own world of despair and confusion. When childhood friend Ted shows up for an extended visit, memories of the grand old game rekindle a semblance of life in the former cocksure Little League superstar. 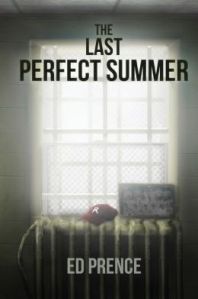 As Ted reminisces with Harry about the good times from their banner Little League season, he detects sparks of humanity within Harry’s tortured being. Ted enjoys the afternoon, and, believing he is doing some good, stays for an extended period of time. In the end, Ted leaves the once-hopeful encounter disillusioned, and, when Harry’s fate is sealed years later, Ted legitimately cannot attend the funeral. Based on how this passage is written, while distressed on the one hand, it is likely that, deep down, Ted would not, or could have not have attended even if he were able.

The structure of the book alternates episodes from the story of their childhood and championship run and Ted and Harry’s visit. The relationship between the two characters is not only central to the story but the strength of the book. While the specific tales that bind them together are necessary, there might be a better way to get at them than alternating which disrupts the flow of the most powerful aspects of the tale. There are highlights in which certain points are made to great effect, but this is not consistently true.

When I was a kid, I visited family friend and former major leaguer and minor league home run king Joe Hauser periodically to keep him company and pass some time. Several times a year I heard the stories about Walter Johnson’s fastball and how much of a “sunuvabitch” Ty Cobb was. “Unser Choe” (Our Joe) was a local hero. He told endless stories, squinting at us through his pale blue eyes while chomping on his cigar. He came over on Christmas Day, always dapper with suit and tie and his remaining hair combed perfectly. Nobody parked near him in the retirement home after his 80th birthday passed or on our entire street in front of our house on Christmas Day. It wasn’t so easy for him to navigate the old Buick anymore, you know. And the tears over his departed wife came easily. Gradually, Joe drifted off into his own world and, then, he left us.

The Last Perfect Summer may not be a great “book,” but it’s a darn good story. Give me a good story any day. Rekindle a memory any time. Where would we be without either? Remember while you can.

A review copy was received from the author. Dave Moyer is an educator and the author of Life and Life Only: A Novel.

The Last Perfect Summer is available as a Kindle Edition or Nook Book download.