The Last Time I Saw You: A Novel by Elizabeth Berg

“So many people who go to reunions think that doing so can somehow change what happened to them.   That the person you’ve become might erase the person you were then.   But of course that doesn’t happen.   …It’s not that you can’t go home again; it’s that you never can leave.”

Elizabeth Berg, author of Home Safe and 17 other novels, has offered a perfect argument for skipping one’s next high school (and maybe college) reunion.   In The Last Time, Berg shows us that people never act the way you want them to, even on the most important of occasions.   And even sadder, we don’t act the way we want or intend to, especially when meeting representatives from our dimly-lit but well-remembered past.

For one thing, everybody tries too hard at these events.   They try to be happier, smarter, more charming or simply more relaxed within their own skins than they were decades earlier.   They rarely succeed.   One of the men in this story comes to understand that, “All of a sudden he feels sorry for everybody.   Here they all are, all these people, all these years later just…  what?   Trying, he guesses.   Just trying.”

One of the women isn’t quite sure how to react as she observes the goings on:  “It comes to her that all of the people in this room are dear to her.   As if they all just survived a plane crash or something.   All the drunks and the show-offs and the nice kids and the mean ones.   All the people she used to know and all the ones she never knew at all.   And herself, too.   She includes herself and her stingy little soul.”

Eventually, we get to see in Berg’s story that people – some people – get out of these events what they must get out of them.   They learn to either completely let go of the past or to simply grip it tighter.   What other choices are there?

“If only people were given the opportunity to behave differently at certain times of their lives!”

But this is more than a Peggy Sue Got Married story.   It is a story about men and women who get a second chance with their original crowd – a chance at reconnecting and either succeeding or failing in life.   The rich graduates worry that they didn’t spend enough time with their kids while they were growing up.   The poor graduates worry that they have no impressive titles or stories of times when they were important.   But this is not really their story…

It is primarily the story of Candy Sullivan, the once-and-still beautiful and popular girl at Whitley High School.   She has been diagnosed with one of the deadliest forms of cancer.   Candy has little time to waste but decides to attend the reunion to enjoy herself while she can.   She leaves her husband at home and flies off to the reunion, where people notice her vacant eyes.   They’re vacant because she’s pondering the question, “Is death an end or a beginning?”

Candy is who we are – or at least we identify with her because she acts like we think we would in her place.   Frightened yet emboldened, imprisoned in a disease state, facing death and yet somehow set free.   Scared and calm, ready for what’s to come.

“This diagnosis has been a kind of gift.   It’s making me look at things and see them.”

You will want to keep reading The Last Time I Saw You to find out what happens to Candy and her all-too-human classmates.   Author Berg surprises us by also making the case that you simply cannot afford to miss your next reunion.

Well done, Ms. Berg.   Life painted large and small all at once.

An advance review copy was received from Random House.   The Last Time I Saw You will be released on Tuesday, April 6, 2010. 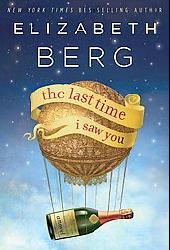