Carol Kaye is the female bass player/musician who came up with and played the opening notes on “The Beat Goes On” (Sonny and Cher), “These Boots Were Made for Walkin'” (Nancy Sinatra) and “Midnight Confessions” (The Grass Roots).   She also came up with the opening notes for Glen Campbell’s first hit, “Wichita Lineman.”   These are the kinds of unique, Behind the Music-style, facts cited in The Wrecking Crew, a book whose second subtitle is, “The unknown studio musicians who recorded the soundtrack of a generation.”

Kent Hartman writes about most of the hit songs recorded between 1962 and 1975, starting with “The Lonely Bull” (Herb Alpert) and ending with “Love Will Keep Us Together” (Captain and Tennille).   Special attention is paid to 19 specific songs, and if one or more of these happens to be a favorite of yours, you’ll want to read Hartman’s account to find out how the song(s) were written and recorded.   Here’s the list (I’m eliminating the quote marks here for the purpose of clarity):  California Dreamin’; Limbo Rock; He’s a Rebel; The Little Old Lady (from Pasadena); What’d I Say; I Got You, Babe; Mr. Tambourine Man; River Deep, Mountain High; Eve of Destruction; Strangers in the Night; Good Vibrations; Let’s Live for Today; Up, Up and Away; Classical Gas; Wichita Lineman; MacArthur Park; Bridge Over Troubled Water; (They Long to Be) Close to You; and Love Will Keep Us Together.

Back in the day when these songs were first released, not too many radio listeners and record buyers realized that the Mamas and the Papas, The Byrds, Jan and Dean, The Beach Boys, The Grass Roots, The Monkees and others were not playing the instruments on their songs.   A group of select musicians, informally known as The Wrecking Crew, recorded the music in Los Angeles studios while the “performers” played the songs on stage when they toured.   It was generally a “win-win” situation for both the high-paid touring musicians and the highly paid studio musicians, and it allowed Brian Wilson to create and record on his own while the official members of the band that he created were off touring.

To his credit, Hartman does cover the occasional conflicts that arose, especially among the musicians – such as Creed Bratton of The Grass Roots and Mike Clarke of The Byrds – who felt insulted by not being permitted to play on their band’s “own” recordings.   Most of the musicians who couldn’t handle the public fame but private shame were shown the door; one exception being the four members of The Monkees, who eventually gained enough power to overrule their managers and record their own songs. 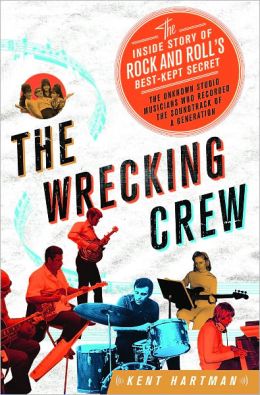 MacArthur Park is melting in the dark, all the sweet green icing flowing down…  Someone left the cake out in the rain, and I don’t think that I can take it, ’cause it took so long to bake it, and I’ll never have that recipe again.   (J. Webb)

The stories of how some of these songs came to be written are perhaps even more engaging and intriguing than the tales of how they were recorded.   And likely the most interesting of all the composition stories is that behind the song “MacArthur Park” and the song suite by Jimmy Webb that eventually became the best-selling album A Tramp Shining by Richard Harris.   It turns out that Webb was quite gun-shy about offering the suite to anyone after it was soundly rejected by the soft-rock group, The Association.   The story of how Harris came to hear what he was to sing as “MacArthur’s Park” is almost worth the price of admission itself.

One caveat about The Wrecking Crew is that Carol Kaye has some personal objections to the book which she has expressed on Amazon.   (I won’t attempt to summarize her concerns here.)   Still, this is a worthwhile read for music fans, musicians and future composers.

A review copy was provided by the publisher.   The Wrecking Crew is also available as a Nook Book and Kindle Edition e-book, and as an unabridged audiobook.